When Tridoshas vitiate, they try to vitiate Mamsa, Rakta, specifically Sira upadhatu of Rakta dhatu and form an upright rounded swelling which is called as Granthi, explained in Ashthang Hriday Uttara Tantra. According to Acharya Sushrut, Granthi is classified into Vataja Granthi, Pittaja Granthi, Kaphaja Granthi, Medoja Granthi and Siraj Granthi. Considering the signs, symptoms and its resemblance with Thyroglossal Cyst in various manners this review article is being done to study the Vataja Granthi and its correlation with Thyroglossal Cyst. The patient complained of pain in the neck region with swelling which would increase in size causing pricking type of pain. The classical interpretation of Thyroglossal Cyst into Vataja Granthi by observing pathogenesis the line of treatment was chosen accordingly. Dashanga Lepa, Triphala Guggulu and Sukshma Triphala were used. Acharya Charak in Shotha Chikitsa mentioned that Granthi should be removed along with the capsule which indicated the capsulated sac Granthi. The treatment of Granthi is also vividly mentioned by Acharya Sushruta where in it should be treated as Shopha at initial stages and later on some local application of Lepa like Dashanga Lepa can be given in Vataja Granthi. During the course of treatment Granthi attained Pakwa avastha on application of Dashang Lepa- it drained on its own, patient got relief from pain, fresh blood, capsule was removed and dry sterile gauze bandaging was done in that region. Sukshma Triphala contains Kajjali which acts as Srotagami by entering Srotas. Triphala Guggulu acts as Shothara, Vranaropan and promotes wound healing. 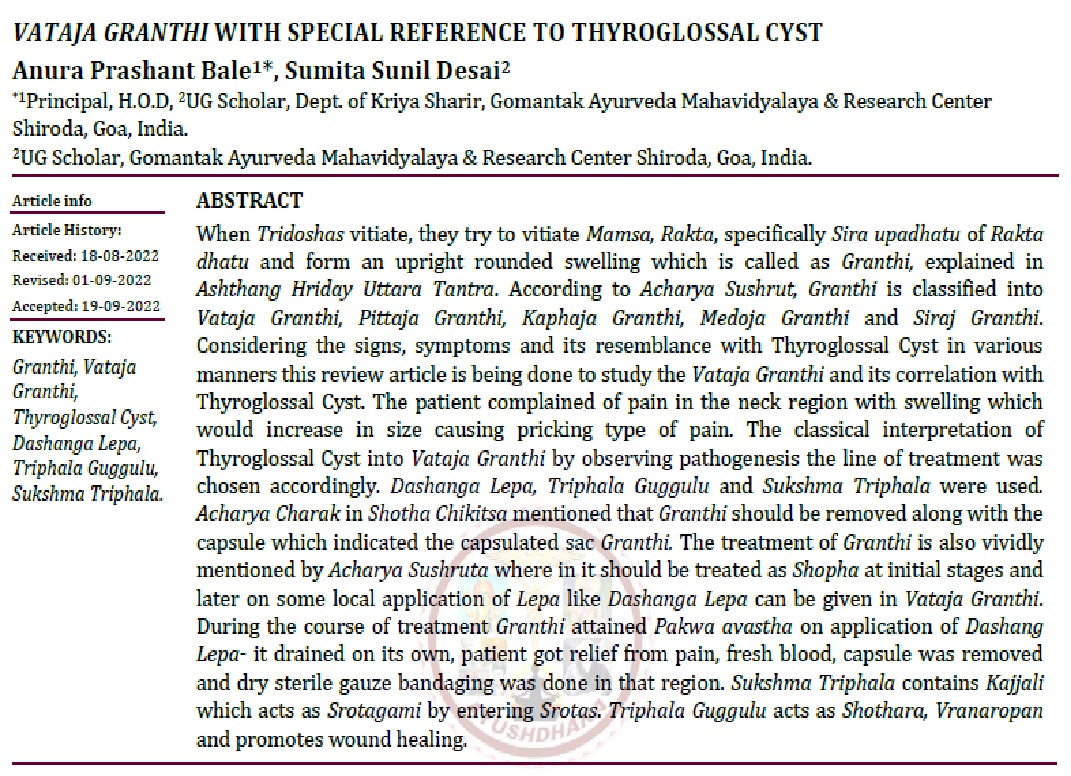