Menstrual irregularities, acne, obesity are the most common reproductive health problems that adolescent girls are facing in present era. The most debilitating underlaying disorder that causes these problems is Polycystic Ovary Syndrome. Initially PCOS was related to infertility only but now it is clearly established that in many it starts with puberty and ends with menopause. The associated endocrine and metabolic abnormalities with PCOS play an important role in causing not only infertility but also put women at an increased risk of type II diabetes mellitus, chronic heart disease, dyslipidaemia, hypertension, hyperinsulinemia and obesity. So, it is very important to treat this condition not only from infertility point of view but otherwise also at the earliest to prevent the above-mentioned risks. Basti is one of the Panchakarma procedure in which medicine is administered in the form of Kwatha or Sneha through anal region or urinary or vaginal region. Basti chikitsa is the most effective treatments of Artavapvyapad.  A 19yrs old female patient approached the OPD complaining of irregular menses, acne, obesity, hair fall and weakness. USG abdomen scan revealed as a PCOS. Patient took lots of allopathic treatment for it but didn’t get relief, so she wanted to take Ayurvedic treatment. Hence, she was treated as per Ayurvedic basic line of treatment of Aartavavyapad. She was administrated Sahacharadi tail basti for 7 days along with Chandraprabha vati and Aarogyavardhini vati. After such two cycles of Basti chikitsa from next month menses were regular. In follow up after 6 months all symptoms were subsided and scan revealed absence of PCOS. During this treatment patient did not report any negative effects suggesting progression of disease. An attempt has been made for successful management of PCOS in adolescence age to relieve her symptoms. 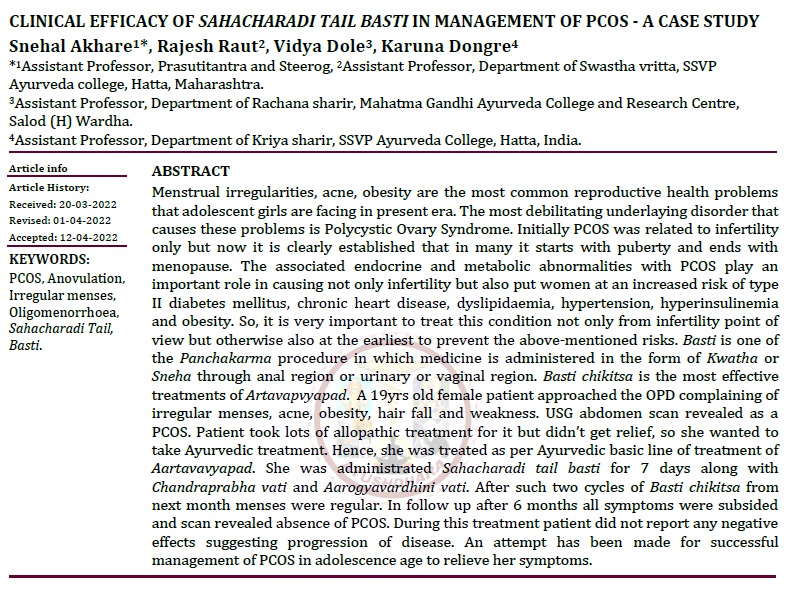